Getting to nationals was the goal.

Winning the sectional was a bonus for the Wright State University men’s bowling team. 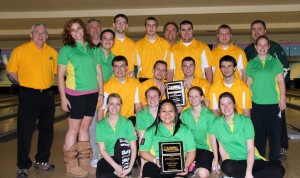 The Raiders led from start to finish on the second day of competition at the Smyrna, Tenn., sectional tournament, clinching a berth in the 2012 United States Bowling Congress Intercollegiate Team Championships. But it was anything but easy for the Raiders early in the two-day,  64-game Baker competition.

By the final block of the day, however, the Raiders were in first place, a position they never relinquished.

This site uses Akismet to reduce spam. Learn how your comment data is processed.

The mission of the Wright State Bowling Program is to provide today's collegiate athlete with the proper tools for a successful tomorrow.

An exciting community of nearly 17,000 students, Wright State is a place where the sky's the limit! Located near Dayton, Ohio, Wright State is a nationally accredited state university with an impressive range of study. Its six colleges and three schools, including schools of medicine and professional psychology, offer more than 100 undergraduate degrees and nearly 50 Ph.D., master's and professional degrees. The university's state-of-the-art facilities are located in a beautiful 557-acre wooded setting. Visit www.wright.edu for further information.